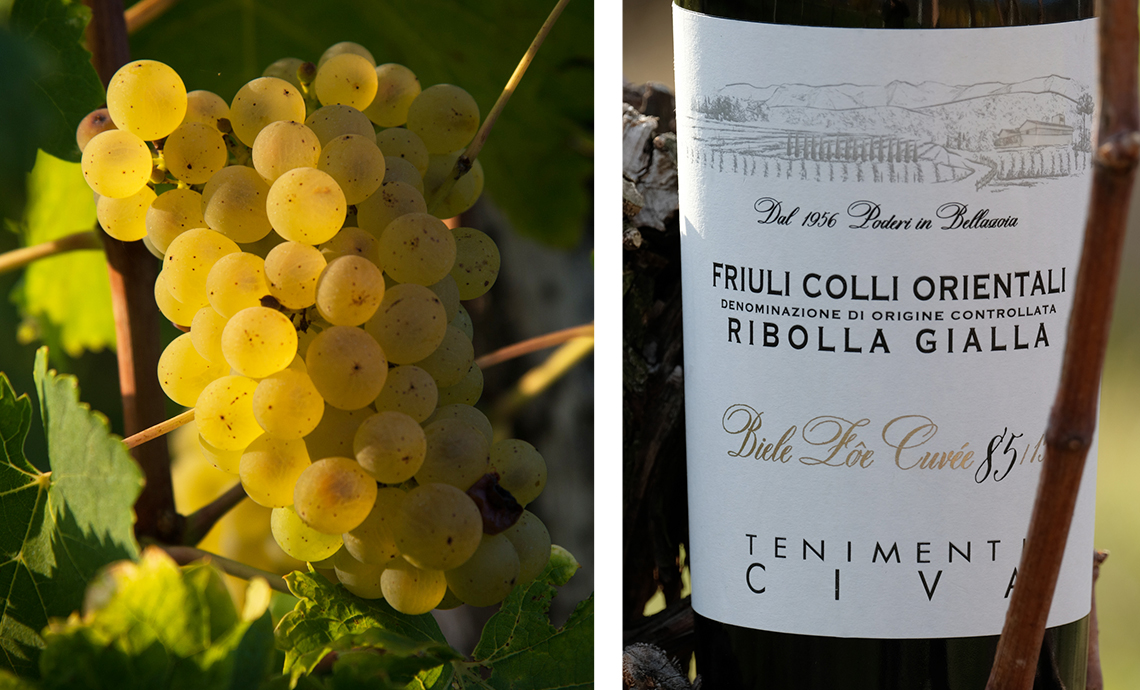 NEW REGULATIONS FOR RIBOLLA GIALLA: MEETINGS FOR ITS DEFINITION CONCLUDED

The opinion of Valerio Civa, a producer in the Colli Orientali del Friuli, who has made Ribolla Gialla his winery’s standard bearer.

Meetings to establish the New Production Protocol for Ribolla Gialla, one of the flagship wines of Friuli Venezia Giulia, have now concluded. The wine can currently be produced in the still version as: DOC Friuli Colli Orientali, DOC Collio or IGT Venezia Giulia (the latter also includes the sparkling type).

Sparkling Ribolla Gialla can be sold as DOC Friuli or with the indication on the label of the single variety (Ribolla Gialla sparkling wine).

“95% of sparkling Ribolla Gialla,” said Valerio Civa, owner of Tenimenti Civa in the hills of Bellazoia di Povoletto, “is sold without any geographical indication. The goal, however, is to ‘promote’ the indication of the varietal alone and of the IGT to DOC Friuli status, to protect the image of Ribolla associated with Friuli.

Another essential element of the New Production Protocol is the registration of the vine in the National Register of Varieties with a new name. Various possibilities are being examined by experts, but only producers in Friuli Venezia Giulia will be able to specify Ribolla Gialla on the label. This is also important for consumers, who will have a clear idea of a wine’s area of origin/production and be able to assess its quality.

The talks on the New Production Protocol,”added Civa, “required long periods of discussion between the various stakeholders, perhaps due to a lack of interest in change and/or an imperfect knowledge of the rules that govern the subject of production protocols.

It was only thanks to the new President of the FVG DOC Consortium, Adriano Gigante, that talks made significant progress towards finding an agreement between the parties. I participated in the debate on the variety,” he continued, “bringing my professional experience to the table, suggesting guidelines for the drafting of the production protocol and some rules that could respond to the various needs of producers, but at the same time guarantee the quality that Ribolla Gialla expresses in this territory, despite the inevitable differences between hills and plains.

In the next few days the proposal will be presented to the Friuli Venezia Giulia Regional Council, which we hope will promptly forward it to the Ministry for Agriculture. Producers are seeking protection and reassurance on the future of Ribolla Gialla, and this can only come with the timely approval of the new production protocol. But consumers also increasingly want clarity about what they drink.

Ribolla Gialla is undoubtedly the most successful product of the year that has just ended. In fact, after four years of continuous growth with averages of 35%, also 2018 saw growth of around 30%. This is a great success for a variety and wine that is strongly identified with Friuli Venezia Giulia; I hope nobody wants to ruin it”.