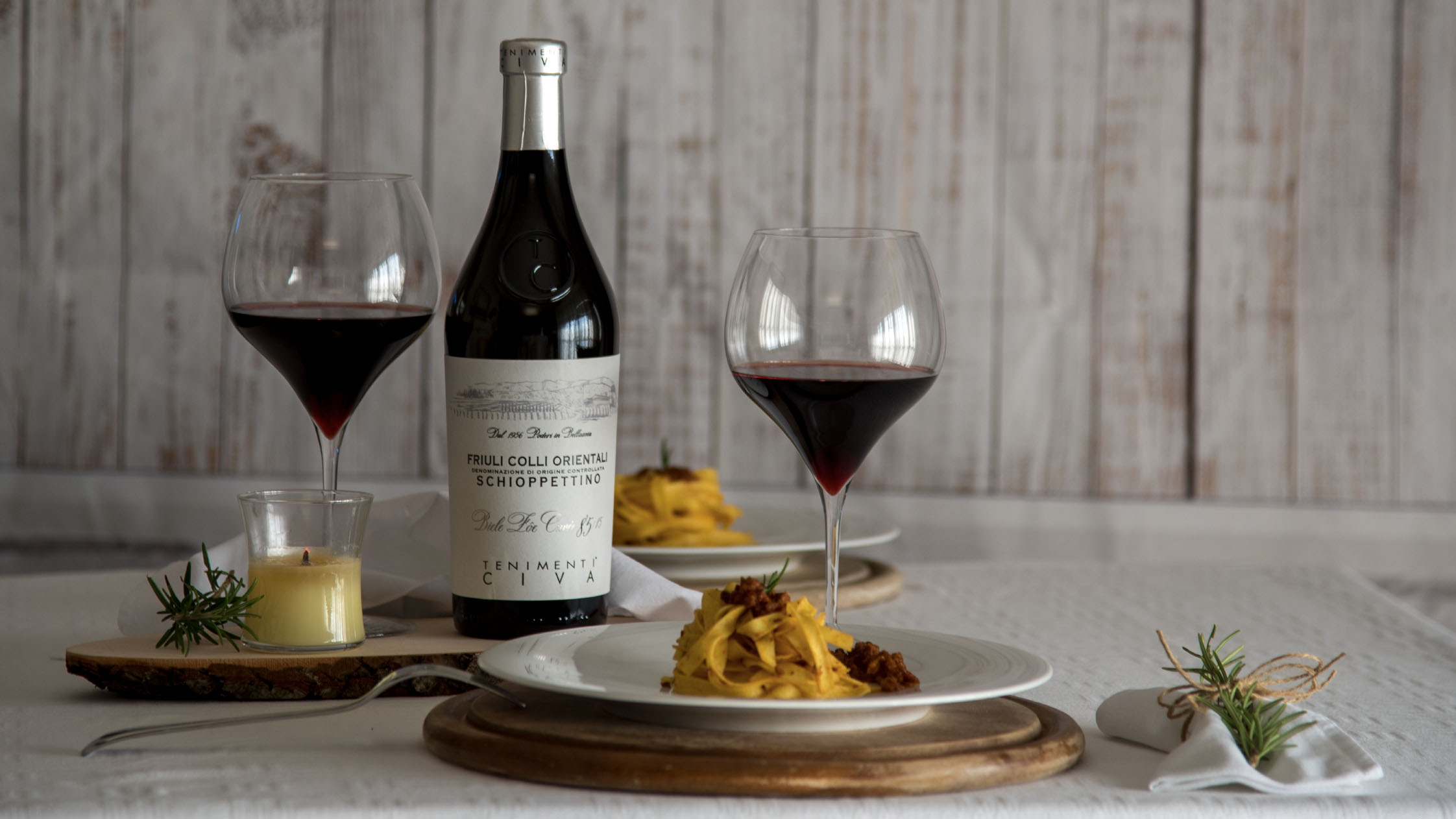 Schioppettino from the Colli Orientali del Friuli: Features and Pairings

Schioppettino dei Colli Orientali is one of Friuli’s precious native varieties. In the seventies it was produced by very few growers and in small quantities. Despite evidently existing, it was doubly ignored. Firstly, it was not included in the list of wines with a controlled designation of origin, within the Colli Orientali del Friuli DOC zone, which was established in 1970. Secondly, at a European level, it was not included among the varieties authorized and recommended for cultivation.

It was even declared “outlawed”, and heavy penalties were envisaged for winemakers who had planted it or continued to cultivate it after the entry into force of the European standard.

The battle for its rebirth lasted thirteen years, until 1983, when it was included among the recommended grape varieties under EEC Regulations.

The challenge was launched by the Rapuzzi family in the hills of Cialla – located 20 kilometres northeast of Udine, in the Colli Orientali del Friuli – with the precious help of the then mayor of Prepotto, Bernardo Bruno, and was also taken up by a family of distillers from Percoto di Pavia di Udine, the Noninos, who set up the “Risit d’Aur” (golden vine cutting) prize.

The award was an official recognition to those who, in any way, had contributed to the survival of this variety, giving it back the dignity that had been trampled on so many times.

The Characteristics of Schioppettino

Schioppettino is a forthright wine, which is popular because it is graceful yet has no pretence of wanting to impress. Purplish red in colour, it is dry, with mellow tannins and a pleasantly bitter finish. Although full-bodied, is has a fairly low ABV and is fresh-tasting.

It displays a marked spiciness especially if the grapes come from gravelly soils, while the fruity expression of berry fruit, such as raspberry, wild blackberry, blueberry, but also cherry and watermelon, is more evident in grapes grown on marly clay soils and red earth. Over time it becomes enriched with elegant aromas of autumn leaves.

Schioppettino is particularly suited to pairing with food. Its acidity and tannins are well integrated, without ever being excessive; indeed, the tannic weave tends to be caressing. The breadth and depth of the aromas help when the wines is paired both with food displaying smoky and/or spicy notes, and with creamy sauces, even those showing a slight sweetness.

Schioppettino is above all the faithful companion of the dishes of typical Friulan country cooking. When the wine shows more austere traits and more incisive structure, it is worth trying with tagliatelle with a sauce of wild boar, venison or hare.

Corn polenta, ever-present on the Friulan table, can be accompanied by soft, not too salty salami, which calls out for red wines low in tannins (with more tannic wines, the resulting flavour combination would be harsh and metallic in the mouth), with refreshing acidity to cleanse the palate.

A corn polenta sandwich stuffed with cow’s milk mozzarella and a few slices of Pitina from the valleys of the Pordenone area (pitina is a meatball made from a mixture of roe deer venison and goat or mutton, with a little pork to dampen the intense gamey flavour of the other meats) is another good pairing for Schioppettino, whose fruity aromas play off the smoky notes of the dish and the milder flavour of the cheese.

Try it with classic organic bread crostini and a mousse made with mascarpone, tender artichoke hearts and lemon peel powder.

A sausage and shallot sauce for pasta requires a quality wine such as Schioppettino which, not being firmly structured, exalts the captivating balance between the sauce and the pasta.

Another suggestion is to try it with duck breast with black pepper, adding a few pieces of apricot to the cooking sauce. The Schioppettino will satisfy the palate, in one of those marriages whose pleasurableness and harmony will not be easily forgotten.