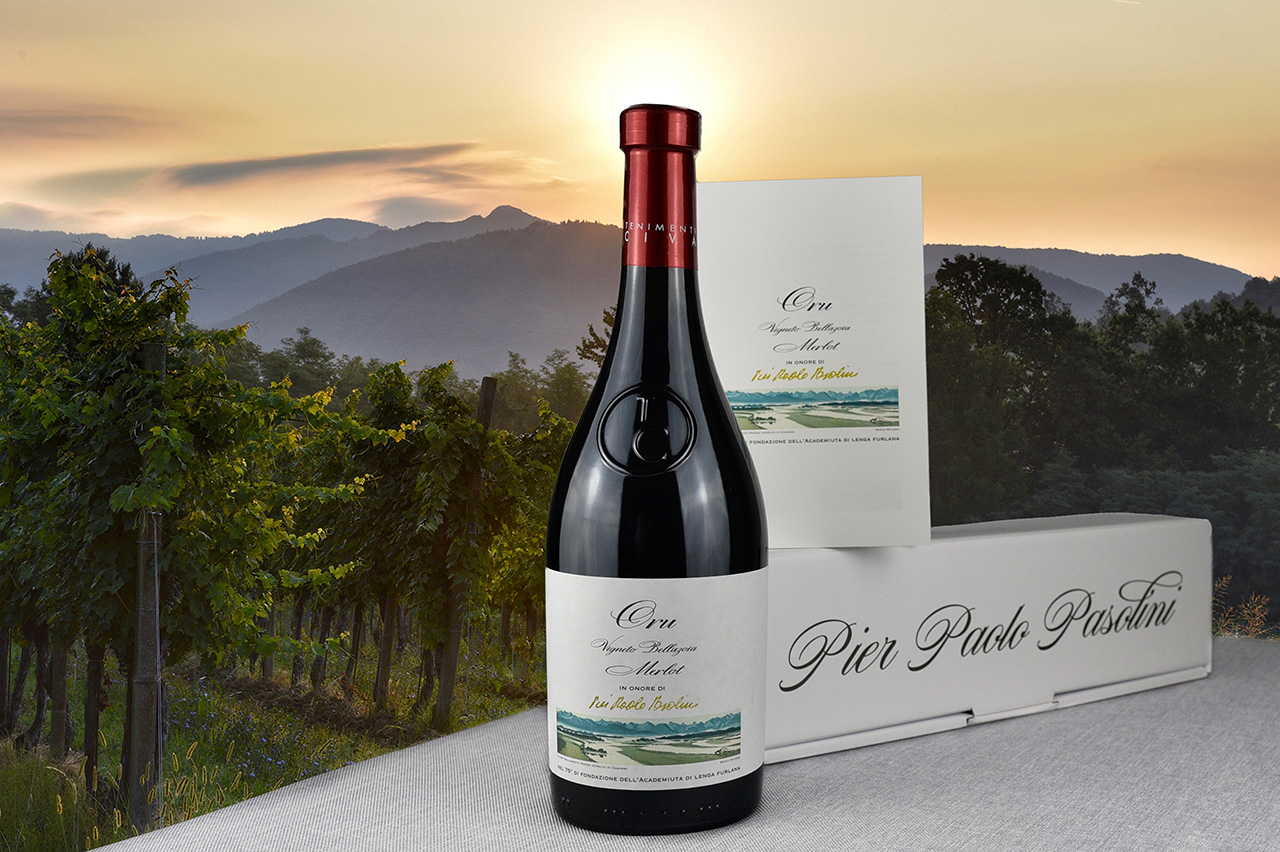 The 75th anniversary of the birth of the Academiuta di Lenga Furlana, founded by Pier Paolo Pasolini in Versuta di Casarsa on 18 February 1945, fell in the difficult year of 2020.

To celebrate that small school of poetry written in Friulan, with a short life but a long heritage, three initiatives were organized, in various ways hindered or delayed by the coronavirus epidemic: in February “ju pai ciamps di Versuta”, an exhibition of engravings and watercolours by Mario Micossi, inspired by places with links to Pasolini; then the exhibition organized by Piero Colussi and Rienzo Pellegrini for the Centro Studi di Casarsa, still awaiting installation, which will illustrate the short history of the Academiuta and Pasolini’s Friulan years; finally the bottle “Oru” (‘gold’ in the Casarsa variety of the Friulan language) produced by Tenimenti Civa in Bellazoia di Povoletto, whose launch will be accompanied by the showing of a video of great historical and cultural interest, on 20 December at 4 pm, simultaneously on the website and on the Facebook Events page of Tenimenti Civa. The video features two scholars: Gianfranco Ellero, historian and biographer of Pier Paolo Pasolini, and Piero Colussi, organizer of the exhibition on the Academiuta.

The wine label is illustrated with a work by Mario Micossi (Artegna 1926 – Gemona 2005), the greatest artist of the Friulan landscape, and an internationally renowned engraver, present in the most important collections in the world – Yale University, Albertina di Vienna, Fogg Museum at Harvard University, Boston Museum of Art, Montreal Museum of Fine Arts, Stockholm National Museum, and Stuttgart Staats Galerie. 2020 marks the fifteenth anniversary of his death. The work on the label is an aquatint depicting the River Tagliamento and the Julian Prealps at Versuta di Casarsa. In 1994 Micossi visited the places linked to Pasolini with a certain regularity, making wonderful engravings, watercolours and pencil drawings that were put on show during the exhibition ju pai ciamps di Versuta.

In the eight-page booklet that accompanies the bottle, numbered and presented in an elegant box, we wrote that “every winery has its roots in the local soil, but Tenimenti Civa in Bellazoia di Povoletto aims to encourage these roots to spread also into the cultural fabric of its region, Friuli, by dedicating special wines to the leading figures in a history that is often richer and more important than the Friulans themselves imagine”: in 2019 we commemorated Tina Modotti in the ninetieth anniversary of the great exhibition of her photographs in Mexico City; this year, in honour of the writer Pier Paolo Pasolini, we extracted the fabulous 2018 Merlot Grand Cru from the private collection.

Since we are talking about a real golden wine, we called it “Oru”, as in the Casarsa variety of Friulan proudly practised by Pasolini, rather than “Aur”, the word used for ‘gold’ in central Friuli: also the choice of the wine’s name had to be faithful to the cultural model that exalted Friulan, and that particular variety of it, as a “pure language of poetry”.