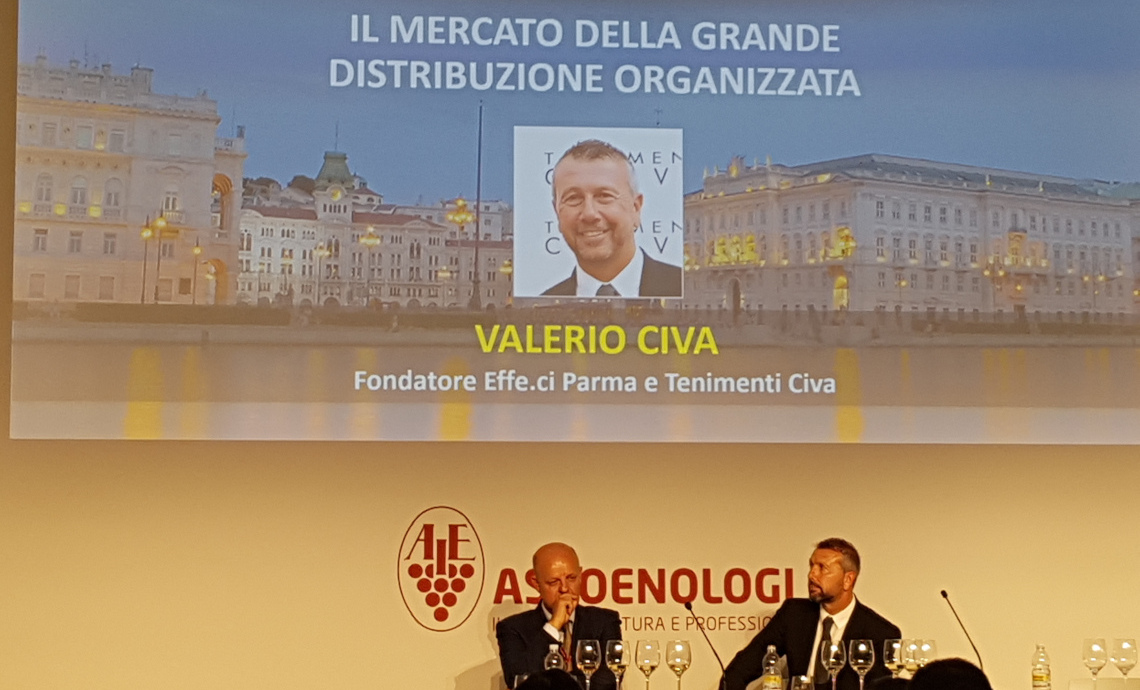 Valerio Civa among the speakers of the 73rd National Assoenologi Congress

Trieste hosted the 73rd National Congress of Assoenologi (the Italian Oenologists’ Association), an annual meeting that took place from 5 to 8 July. The many speakers touched on topics of great interest. Assoenologi, a trade association established in 1891, also gave particular importance to issues regarding the large-scale retail trade, including supermarkets, represented by large Italian and foreign groups with their own stores (Auchan, Bennet, Carrefour, Coop, Esselunga, Finiper, and Pam), as well as small and medium enterprises in the wine retail sector. The owners have between one and a few dozen smallish stores, which join forces in purchasing groups in order to achieve greater negotiating power (an example is Conad).

The speaker was Valerio Civa, founder and President of Effe.ci Parma, a company that markets recognized quality wines and great Italian brands. He is also a wine producer in the Colli Orientali del Friuli with the Tenimenti Civa winery, based in Bellazoia di Povoletto. The attention of the large-scale retail trade towards wine developed in the early 1980s, and grew over the following decade. It was in this context that the company in Parma was set up. “I had sensed the need for the large-scale retail market to respond to consumer demand,” said Valerio Civa. “Customers were looking both for wines for everyday consumption, and for medium-high quality, branded products. These were wines that supermarket chains were unlikely to stock. Today, Effe.ci has a turnover of €70 million, with constant growth of 10% per year. It is the leading supplier of wine to Italy’s major supermarket chains, and employs over 50 employees.”

“Supermarkets in Italy,” he continued, “represent a sales channel of increasing importance. This is confirmed by the data: Italian wine production in the last three years was 4.5 billion litres (source Assoenologi), with 45% accounted for by direct consumption (a further 45% is exported and the remaining 10% is destined for the spirits market). Of this percentage, 75% is packaged wine (the remaining 25% is unbottled). These figures show the important changes in consumption trends compared to two decades ago, when unbottled wine was worth three times bottled wine.

It is also interesting to note that 37% of the wine consumed in Italy comes from supermarkets, as well as 49% of packaged wine.

The 75 cl bottle is the market leader for both still and sparkling wines. If we categorise wines by colour, it emerges that red represents 54% of the total, white 41% and rosé 5%. Over the medium and long term it can be observed that sales of white wines are growing slightly more than reds, while rosés are stagnating.

Supermarkets, including the Discount channel, are worth €2.35 billion, while 700.5 million litres are produced and 790 million bottles sold (wine and sparkling wine) in the available formats. (Nielsen data as of May 2018).

The relationship between wine and the large-scale retail trade is evidently set to last. This is confirmed by the greater variety and space dedicated to wine, and even the creation of separate offices within the department. The reasons are essentially attributable to three elements: differentiation, a focus on customer loyalty and profitability.

“Wine,” explained Valerio Civa, “unlike other food and beverage products, whose market is in the hands of a few major players, offers the possibility of differentiation and variety thanks to a large number of suppliers and the development of private labels or exclusive lines.

Customer affection for a given supermarket also depends on the variety of fine wines and established brands it offers. This selection can attract high-spending customers both from the nearby area and from dozens of kilometres away.

Wine – a little less sparkling wines – allows supermarkets a higher margin than any other sector of packaged food or beverage. The combined profit margins on beers, liqueurs and soft drinks are below those on wine. The sale of sparkling wines, in particular Ribolla and Prosecco, all round the year (and not just linked to particular seasons), has contributed to this increase.”

The attention of the large-scale retail trade to the needs of the end customer is an essential element of success. Consumers are increasingly sensitive to issues such as traceability along the production chain, respect for the environment and regional products, such as wines from native varieties. “Ribolla, a traditional variety of Friuli Venezia Giulia, is an example of tradition meeting innovation. It evolved from a sweet filtrate to dry still wine and has recently met with great success as a sparkling wine. The credit for sensing the potential of this grape goes to the Friulan wineries and winemakers,” said Civa, “who continue to plant Ribolla Gialla with the aim of transforming it into a great wine.”

“The evolution of purchasing and consumer behaviour in Italy is such as to require constant vigilance from the market, which must deal with increasingly demanding and informed consumers. This is why,” he observed, “the role of the oenologist must be wide-ranging, envisaging active and synergistic participation in the ‘commercial’ side of things, effectively working alongside large retail buyers with the aim of developing quality products in line with customer expectations.

Until recently, speaking of quality wine in the large-scale retail market may have sounded like a contradiction in terms. Today, consumption models have led to wider variety on supermarket shelves, where you can find medium-high quality wines from Italian and international brands. This is all part of a natural process of evolution and innovation in the modern retail trade, as consumers are increasingly attentive to the quality of what they put in the trolley.

It is on the basis of this analysis,” concluded Valerio Civa, “that I chose to set up Tenimenti Civa in Bellazoia di Povoletto in the Colli Orientali del Friuli, creating an innovative and unique high-level project aimed at the large-scale retail trade. The wines, in fact, are produced from our own grapes and those produced by very small growers who work alongside us in the production project. Their work in the vineyard is supported and monitored by us, and they are promptly paid at a fair price.”

A BIT OF HISTORY

The first supermarket opened it doors in 1957 in Milan, under the Coop Lombardia sign. The same year, Supermarket Italiani, now Esselunga, opened in Viale Regina Giovanna. The first Pam Group shop opened its doors in Padua in 1958. It was the first privately-owned Italian group to believe in the potential of the large-scale retail trade. In 1964, on the other hand, the first branch of Bennet, a small food store, was opened in Como, and in the 1980s became a hypermarket.

The first hypermarket, meanwhile, opened in 1972 as Città Mercato Gruppo Rinascente, and was owned by the Agnelli family. This was followed by the arrival of the French multinational Carrefour, with its Carugate store. The idea of introducing shopping malls on the American model (hypermarket with shopping arcade) was Brunelli’s, and in 1976 in Cremona he opened Iper la Grande I.

In 1989 it was Auchan’s turn in Turin, with its first hypermarket; the company later merged with Gruppo Rinascente Città Mercato. The first discount store appeared in 1992 in Verona, with Lidl. The following year, again in Veneto, saw the arrival of the first Italian group of discount stores, Euro Spin. In 1994 it was the turn of MD Market, Italy’s second company in the Discount sector. Later, others would arrive on the scene, and others would disappear. In 2018 Aldi was established, once again in Veneto.

Cash & Carry is also an important channel for wine, albeit concentrated in a few brands. It is not grouped together with the large-scale retail market, but considered as a channel in its own right. Metro opened Italy’s first Cash & Carry in Cinisello Balsamo in 1972, and it is still thriving. Sogegross opened its first store in 1970. Today it represents the second largest company in this sector.

In the 1960s and 1970s, the per capita consumption of wine was more than double the current level (100 litres versus 38 litres). Unbottled wine was in greater demand than packaged wine, which was paradoxically considered of lower quality! Supermarket shelves were mostly stacked with wines in large one- or two-litre bottles (the wine box would not make an appearance until 1983), and the few 75 cl bottles were sold at low prices.

This website uses cookies to improve your experience while you navigate through the website. Out of these, the cookies that are categorized as necessary are stored on your browser as they are essential for the working of basic functionalities of the website. We also use third-party cookies that help us analyze and understand how you use this website. These cookies will be stored in your browser only with your consent. You also have the option to opt-out of these cookies. But opting out of some of these cookies may affect your browsing experience.
Necessary Always Enabled

Any cookies that may not be particularly necessary for the website to function and is used specifically to collect user personal data via analytics, ads, other embedded contents are termed as non-necessary cookies. It is mandatory to procure user consent prior to running these cookies on your website.