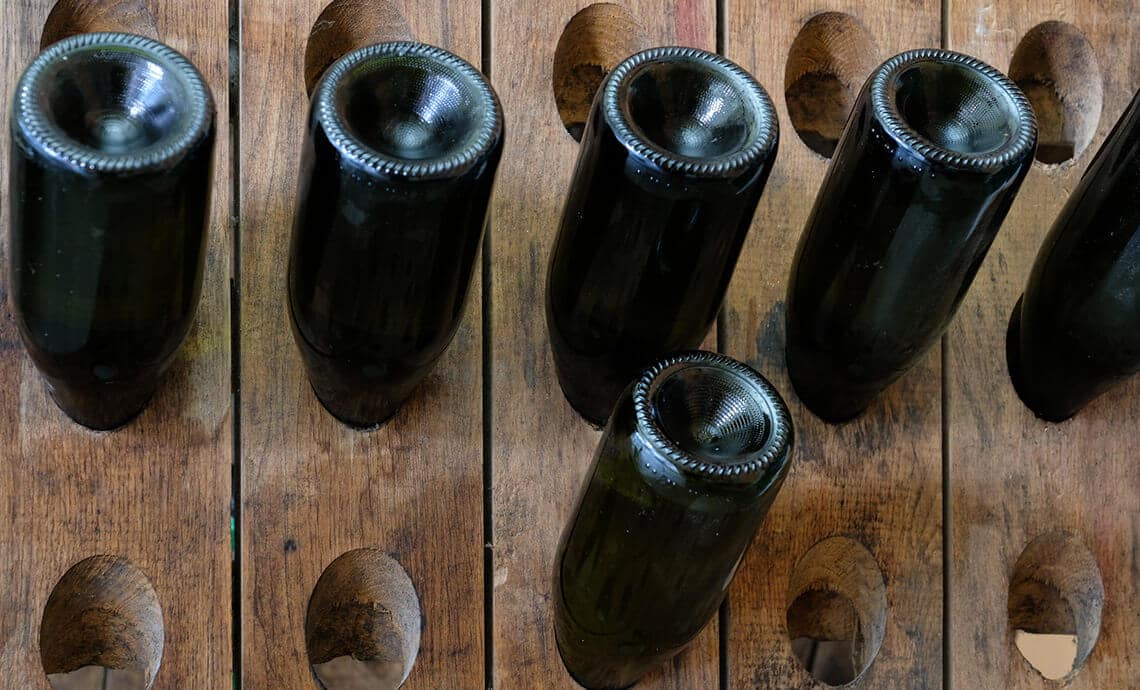 There are two methods of producing sparkling wine: the metodo classico, or champenoise method, and the Charmat, or Martinotti method.

Let’s look at the differences and the points in common.

Aromatic varieties – Moscato Bianco, Moscato Giallo, Moscato Rosa, Malvasia Aromatica… – and those whose fruity and fresh floral notes are to be highlighted – for example Ribolla Gialla or Glera for the production of Prosecco – are suitable for producing sparkling wines following the Charmat method.

Instead, the varieties normally used for the production of sparkling wines using the metodo classico are Chardonnay, Pinot Grigio, Pinot Nero, Pinot Meunier and Pinot Bianco.

For both methods we start with the base wine

The sparkling winemaking process begins with the production of a base wine obtained from classic white-wine fermentation, mostly in stainless steel, and with a low alcohol content – usually 9.5-10.5 % ABV.

Grapes often come from vineyards that differ in terms of soil, climate, exposure to the sun, etc. This allows the winery to carry out separate vinifications and then create a blend of the wines (called a cuvée), which forms the basis for sparkling wine.

If the wines of the cuvée are from the same growing year, we speak of vintage sparkling wine.

The base wine is added with yeasts and sugars in sufficient quantities to trigger the refermentation process – also known as second fermentation –, which differs substantially between the two methods.

In the Charmat method, the base wine is placed in large steel containers, hermetically sealed pressurized vats, and a syrup made up of sugars, yeasts and food for the latter (bottling liquor) is added. The high pressure that forms during the second fermentation phase (the process that transforms still wine into sparkling wine) is due to the activity of the yeasts, which feed on the sugar and transform it into carbon dioxide. This remains trapped in the container and makes the wine effervescent.

The sparkling winemaking method in the bottle

In the metodo classico process, the base wine with the addition of syrup (the liqueur de tirage, or bottling liquor) is poured into dark glass bottles of sufficient thickness to withstand the pressure of the carbon dioxide that forms inside. The bottles are then closed with a crown cap and stacked horizontally in a cellar where the temperature must oscillate between 10 °C and 12 °C. Refermentation (bottle fermentation) then begins, and lasts for a few months. At the end of this phase, the bottles are placed neck downwards in the holes of wooden trestles (hand riddling racks).

Expert cellarmen shake them regularly to put the lees in suspension and facilitate the maturation of the wine, which is now sparkling. During this phase, which can last several years, new compounds are formed that characterize metodo classico sparkling wine. At the end of this period, the cellarman gradually inclines the bottles (a technique known as rémuage, or riddling) until they assume a vertical position, in order to make the deposits formed in the bottle flow towards the cork. Rémuage can also be performed using specific apparatus.

Filtration in the Charmat method

Still in the pressure tank, the sparkling wine is filtered to separate it from the lees that formed during the refermentation process. It then passes through a second pressure tank to be bottled and closed with the classic mushroom-shaped cork.

The sparkling wine then rests in the cellar for some time before being released.

Disgorgement in the metodo classico

To eliminate the deposits that have formed, the neck of the bottle is placed in a cooling solution for a few seconds. The crown cap is then removed and the pressure of the carbon dioxide formed inside expels the deposit collected near the cap. This phase is known as disgorgement (dégorgement).

When the bottle is opened, a little sparkling wine inevitably comes out, and is replaced with the same sparkling wine or with a mixture (liqueur d’expédition) usually composed of wine, sugar and concentrated must.

he blend used is kept secret, since it defines the final character of the sparkling wine, which will be more or less dry depending on the amount of residual sugar. The last phase is the closure with the traditional cork stopper.

The Charmat method has shorter production times than the classic method.  The greater quantities produced at the same time and the shorter processing times of the Charmat method result in a lower price to the consumer than the metodo classico, but the quality of the final product always depends on how good the grapes are.